Dr. Joanne Joloy, Director of International Expansion at CADENA, discusses the latest mission to act after the earthquakes––and tsunami—in Indonesia, on September 28 and 29. An estimated 1.5 million people have been affected by these events, there are almost 42,000 displaced people and an estimated 1,200 people deceased.

We left on October 3rd from Mexico City to Los Angeles, and from there to Taiwan. From there, we took a flight to Jakarta but, barely after 40 minutes, someone on the plane screamed. The flight assistants were requesting a doctor on the plane, but no one was responding. As I approached to see what had happened, I realized it was a patient who was in his last breaths.

Unable to communicate, I couldn’t understand what had happened. The patient went into cardiorespiratory arrest. We started resuscitation maneuvers inside the plane, while the pilot returned to the nearest airport. This event took more than 45 minutes and the patient, unfortunately, died.

The event delayed us almost six hours, but once in Jakarta, we bought tickets to Gorontalo, and from there we were part of a caravan to reach ground zero. The journey lasted 28 hours, 12 of which I spent in the trunk of a van, along with volunteer Gabriela Achar.

On the way you could see very nice beaches, I couldn’t believe we were heading for a disaster zone.

Entering Palu was entering the end of the World. Absolutely everything was destroyed. There was a smell of death that I had never noticed before in my humanitarian trajectory; I had to cover my mouth and nose with a cloth.

We were at ground zero during the day and returned before dark, as a nearby volcano had erupted. On our way back, we stopped at a community that was above the water, to play with affected children.

This mission was particularly difficult because of the language barrier. From the plane to ground zero, it was very difficult to communicate with the locals, as they did not speak Spanish, English or French.

In total CADENA delivered 200 Sawyer water filters, which will impact the lives of more than 16,000 people affected, who do not have access to safe drinking water. 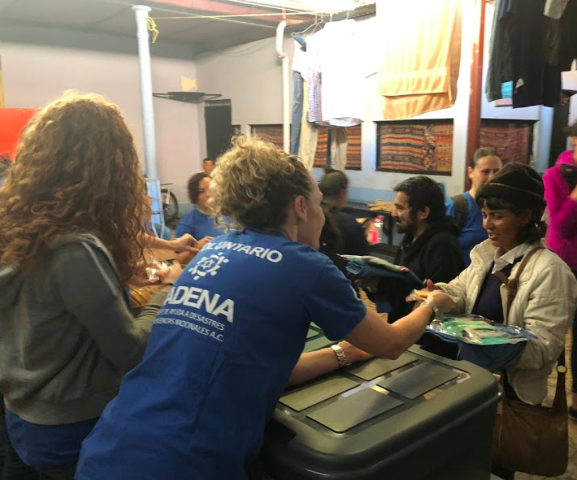 CADENA Guatemala attended the “Nuestra Señora de Guadalupe” soup-kitchen to help peopel in need. 150 to 200 people attend this kitchen every day and are given a warm meal, a shower, and a shelter from the cold.

CADENA CJG volunteers prepared them breakfast and donated blankets and hygiene kits, as well as sharing an intimate moment with them.

A day before departing for the humanitarian mission, Salomon Shabot was feeling sick. Despite having high temperature and acute symptoms of malaise, the college student felt compelled to go.

He met the group of twenty volunteers—including a pediatrician, a dentist, a general practitioner, a gynecologist—who left Mexico City for the northern state of Chihuahua on the 5th of August. For two days, they traveled hundreds of kilometers of the Sierra Tarahumara, meeting with remote indigenous communities suffering from malnutrition, lack of medical attention and extreme poverty.

Relying on a Tarahumara (a local dialect) interpreter, the group delivered basic food packages with the help from Chihuaha’s Food Bank, as well as providing medical and dental consultations. “What surprised me most was the high rate of diabetes,” commented volunteer Victoria Mitrani, who assisted the doctors, “there were also many people with eye problems.”

Luckily for Salomon, the pediatrician for the mission, Dr. Manuel Mochón, had been his doctor as a child. After a quick consultation, Salomon felt much better and decided to help him in his work. “Among those we attended,” he says, “I remember a man who walked eight hours a day in the mountains; since he couldn’t carry water, he had to take what he found. He was very sick.”

“At some point the cell phone signal stopped working,” gynecologist Maria Carmen Rosano said, “we didn’t have technology at our disposal. So the 20 volunteers met face to face. Not having the technology made us have more contact. We listened to each other. We learned from everyone.”

The communities were so remote that some of the beneficiaries walked for four hours to meet the group of doctors. In the second day, they conducted consultations despite a heavy rain. For many, it was the first consultation with a dentist. Although anesthesia ran out, many opted to continue with their procedures.

“We were efficient because we shared the same tools,” says Dr. Rosano: “love, respect, empathy, solidarity and a search for justice.”

The Guatemalan Jewish community spent a day providing aid and relief to victims of the Volcan de fuego eruption in June. WJC CEO, Robert Singer, is in Guatemala visiting this incredible community. Check out their hard work:

CADENA International has joined forces with Save the Children Colombia in an effort to revisit the Colombian-Venezuelan border in the city of Arauca to help thousands of Venezuelan migrants living in deteriorating conditions. The crisis in Venezuela has led hundreds of thousands of children, young adults, families, and the elderly to flee the country in hopes of finding a safe place to live.

We need your help today  to bring water filters, solar lamps, and resiliency books to children happen on July 24th. Your donations will go directly in providing thousands with humanitarian aid and will give back to those suffering during these critical times.

CADENA will be revisiting Guatemala with more donated supplies and humanitarian aid to reach thousands more living in critical condition in the next several weeks.

We plan on bringing our certified and trained humanitarian aid volunteers to best assist on this mission. We will bring our response team of doctors and psychologists to further help the injured.

Supplies such as blankets, non-perishable foods, and medicines to local shelters and will continue to visit homes in the surrounding areas to provide humanitarian aid.

With the incredible support of our donors, we were able to provide local Venezuelan communities with emotional support, water filters, and solar lamps to more than 2000 families.

Partnering with Save the Children Colombia, our reach was significantly impactful as we continue to visit surrounding areas and help those affected by the circumstances in Venezuela.